One of the biggest issues in America is the student loan crisis. Regardless of what side one’s opinion falls on, it can easily meet the criteria of an emerging crisis. There is a massive amount of debt saddled on the shaky foundations of recent college graduates. In the midst of debates about whether there should be student loan forgiveness, programs to forgive debt, or other solutions, questions have arisen that question the fundamental role and utility of a college education in the 21st Century.

For my generation, college was lauded not just as a way to “get ahead”, but also almost as a necessity for anyone who wanted to have some degree of success in life. It was pushed on all academic, social and behavioral levels and the common theme was that without at least a Bachelor’s Degree, you would end up as some sort of derelict or degenerate, cast to the fringes of society. For those who performed badly in school, either with poor grades or poor behavior college was used as a looming threat: “That behavior will keep you out of college…” And for those who were high achievers or well behaved, college was used as encouragement “you’re ahead of the curve! When you get to college you’ll be well prepared and able to relax a bit, I know how hard you work now!” Anything outside of a college degree was viewed as unsteady, unstable or just a temporary solution until my generation could get their degree and secure a “good, stable job”. 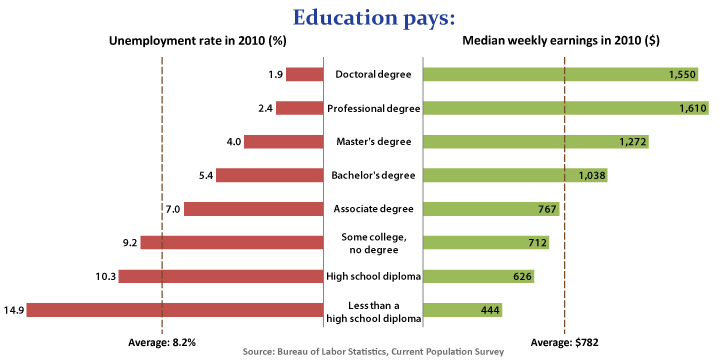 College is still useful and can help people go far in life. But college will always be there, whether you start school at 18 or 28. Sometimes life experience, cheap, debt free living, and hard work will set you up for more success than going straight into college.

Logically, it makes sense. When Baby Boomers, Gen Xers and the Greatest Generation were in the throes of their careers, a college degree was a great leg up on their peers. Part of this was because so many people either did not go to college, or did not finish college. There was plentiful manufacturing, union or service jobs for those who never wanted to go the college path. When companies started closing up shop in the United States and moving their base overseas, many of the folks who worked for decades in a certain plant or for a company now found themselves without a job and at the mercy of the economy. They saw their college educated peers, either in a secure government job or working a safe white collar job, and thought it would be a great future for their kids.

No one can fault a humble school teacher or guidance counselor for their failure to foresee the way the economy and the internet would develop. Having their own lived experiences, teachers, parents and administrators wanted to make sure their children were well set up for life and thought everyone could secure some comfy job, either with the government at the local, state or federal level or with a big company in an office role that would never be outsourced.

One of the biggest issues though, with this “college degrees are necessary!” approach is that it was viewed as an end state. Many of us were encouraged to just “get your degree” and study something you liked so you would stick with your education. Liberal Arts degree, without commensurate job experience are not very valuable in the marketplace, and there are only so many government or white collar jobs to go around.

My biggest criticism of the college craze that we lived through is the denigration of labor work and entrepreneurship. Manual labor and skilled labor jobs were not encouraged and seen as beneath us. Starting our own business was too risky. What about $120,000 in student loan debt as risky?

The internet has allowed the archetypal “everyman” to have access to the same information as a Harvard Professor. The gatekeepers of knowledge have lost a grasp on their power, and we can learn as much as we want to and as much as we need to without enrolling in college. Nowadays, colleges are shutting down and we are starting to see the ship turn somewhat. Labor is not viewed as something negative and starting your own business is not viewed as an extremely risky measure. A college degree is still a valuable, and useful thing to have, but they are not for everyone. There are multiple paths to take when one graduates high school, and it does not have to start with enrolling in a University the next fall.