Like any campaign, my first deployment to Afghanistan was marked by moments of sheer thrill, terror and ecstasy and also with moments of boredom, doubt, and drudgery. During one of this slower moments, I pulled out a paperback copy of The Iliad. Not wanting to delve into anything new or too deep, I picked the The Iliad because it was one of my favorite books, and if we were interrupted with gunfire, I could put the book down, focus on the task at hand and not be mentally sidetracked with new thoughts and ideas rolling around in my head. As readers know the “let me finish this paragraph” is a real thing, but those few seconds could be the difference between life and death in a gunfight.

At the moment, my Squad Leader had been in a bit of an existential crisis for the past few weeks, doubting command and feeling as if he were under the heel of poor leadership. A great, but self absorbed Infantryman, he asked me why I was reading that garbage. After reading him a few lines about Achilles rancor with Agamemnon, he took the book from me and read it himself, feeling a vain, but fitting kindred with Achilles. For him, the characters became more than “Eric Bana’s brother from that Troy movie” and the issues and problems they dealt with were similar to a Staff Sergeant being micromanaged by a Battalion Commander. 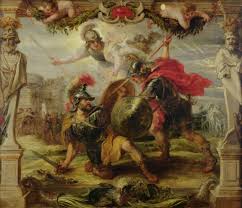 Sometimes, little motivation is needed to strike the killing blow and the gods are simply spectators for a man’s rage.

War is a near constant condition of the human race, at one place or another. Despite all the advances, we are still warring with each other, though every war has it’s own unique quirks that Soldiers must recognize and master in order to win victory. An M4 would be strange to a pikeman, and a Gladius would not be in capable hands if it was wielded by a modern Soldier, but there is still kinship down through the centuries.

What is it? A common thread among men who fight and die, the lower enlisted, the junior officers, the infantry and the dueling cannons, is the willingness to test themselves in the face of battle and the comradeship that often develops in battle. This is an important connection; A greek phalanax may have never charged a machine gun nest, but they know the pain of losing a close friend and brother during combat, and a modern day Soldier may never stab someone at close range, but they know the thrills of testing themselves in battle and the consequences of being ill-prepared to meet the enemy.

Having a connection to military history and heritage is even more important in modern times. Whereas soldiers used to come home from war, and readjust into a close knit and understanding community, we are now polarized and veterans are expected to fit into pre-arranged caricatures of themselves. You can be the victim who was hoodwinked into going off to war, a bloodthirsty fanatic who loves killing or a hopeless romantic caught up in the pomp, prestige and grandeur of combat operations. However, voice your own opinions and pursue your own dreams outside of the selected narratives and we veterans will be given a very hard time.

Connecting with military history though, shows you that your experience, while unique is not an isolated example. There are many accounts of bravery under fire, self-doubt during battle and overcoming fear, and the claustrophobic isolation one feels when in the thick of a hard fought battle. For me, understanding that generations before me had undergone worse than anything I had endured meant that I could get through another day; reading a bit of military history provided larger context and motivation. One man is no better than another, so if he could do it under harder circumstances, why can’t I?

The millenial experience in combat is still writing itself. Largely, we are generation that volunteered for war and were given lip-service and the occasional care package by an aging, heavily taxed, decaying population. As we grow into ourselves, I urge every veteran to be proud of their service and to refuse to be spoken for; attack your hopes and aspirations the same way we had to attack the mountains of Afghanistan or the sands of Iraq.